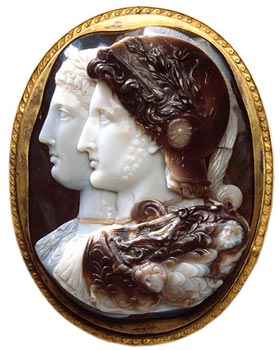 Glyptics is one of the most ancient forms of art

This is the art of creating images on a semi-precious and precious stones, or gemmas (glipts). Gemma is a carved stone with a convex (cameo) or- in-depth (intaglio) image. Gemmas were being created on soft stones such as steatite, hematite, serpentine, and also on hard rock stones – carnelian, chalcedony, crystal – manually or with the help of simple machines with rotating cutters.

Carved stones formed with he figures of animals and people, as well as stamps – first appeared in Mesopotamia and then in Egypt and elsewhere in the Mediterranean. In ancient Egypt there were spread rings with stone signets, often in a form of esteemed Egyptian Scarab beetle, usually carved from lazurite.

In the Hermitage there is one of the most famous gems – “Gonzaga Cameo” from the three-layer agate with the effigy of the Egyptian king Ptolemy II and his wife (III century BC).

You can order various jewelry with cameos and intaglios from any available stones in our workshop. Due to the virtuosity of execution and detailed gemstone carving of the image they are not just jewelry, but veritable pieces of art.